How to Treat Jellyfish Stings

A jellyfish sting can easily spoil a fun at the beach, fortunately, most jellyfish stings are not severe, yet a jellyfish sting cause immediate pain and burning that can last for several hours. Raised, red welts develop along the site of the sting, often in a whip like fashion, and may last for 1 to 2 weeks. Itchy skin rashes may appear 1 to 4 weeks after the sting. Extensive stings, allergic reactions, or severe toxic reactions are not common but do occur. The bad news is most of the solutions you’ve heard of will probably only make it worse.

The moon jellyfish shown below are common in the Atlantic Ocean. This jelly is translucent-white with a saucer-shaped body and is often found near shoreline, and near shallow bays and harbors. The moon Jellyfish stings have only mild venom and and can easily be treated. 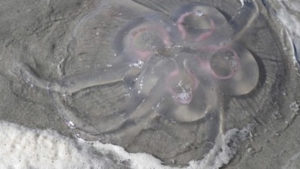 Jellyfish are often present in coastal waters, having been brought ashore by winds or ocean currents. They are most common in warm ocean waters, especially along the Atlantic coast of the United States. Stings result from contact with the tentacles, which trail from the jellyfish’s see-through body. Jellyfish swimming in the water are often hard to see. Beached jellyfish CAN still sting if touched. 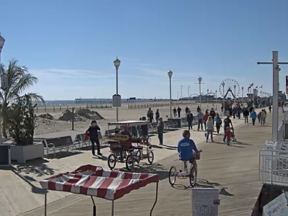 Live from Ocean Gallery on Boardwalk

This webcam at Ocean Gallery is located on the Boardwalk and 2nd Street in Ocean City, Maryland. This Globally Famous Attraction has been a Landmark Attraction on the boardw... 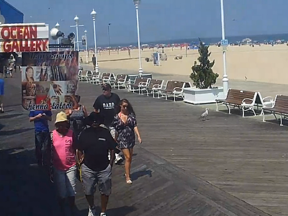 This webcam pans the Ocean City boardwalk north and south. This webcam at Ocean Gallery is located on the Boardwalk and 2nd Street in Ocean City, Maryland. This Globally Fam... 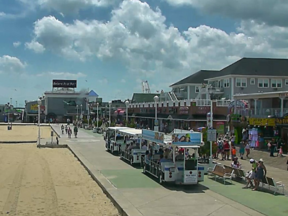